Love them or hate them, there is something quite magical about mushrooms, and no, we’re not talking about Psilocybin mushrooms or magic mushrooms. We are of course referring to functional mushrooms, which belong to a group of natural substances called adaptogens.

Adaptogens are an ingenious group of plants and fungi that help our bodies adapt, as their name suggests, to physical and emotional stressors. They have been used in traditional medicine for thousands of years to help with low mood, stress, anxiety, depression, and poor immune health.

How are functional mushrooms different from regular mushrooms?

Functional mushrooms provide many of the nutritious benefits of usual mushrooms – they’re a great source of selenium and vitamin D - but they also contain bioactive compounds that help keep our body in a natural state of balance.

Some medicinal mushrooms are edible, but they are traditionally set apart by their high levels of compounds such as beta glucans and triterpenes, which can make them much more bitter and indigestible.

But there are plenty of ways to supplement with mushrooms : most functional mushrooms are dried, brewed into a tea or turned into concentrated extracts.

The superstar shrooms and their health benefits

And their alleged health benefits are impressive.

Take the edge of with Reishi, favoured for its calming properties and mood-boosting triterpenes.

Need a brain boost? Try Lion’s Mane. It encourages the production of nerve growth factor (NFG) and myelin, both of which are crucial to brain health. It may also improve cognitive function [1], increase concentration and help with anxiety [2].

And Chaga mushrooms are an antioxidant powerhouse, making them excellent contenders for fighting free radicals and inflammation.

Shiitake mushrooms, possibly one of the more familiar fungi on the list, are particularly good for your heart, and have been found to lower cholesterol and maintain healthy blood pressure and circulation.

And Cordyceps can help if you’re feeling low on energy or in need of a pre-workout boost. They have been shown to help the body use oxygen more efficiently [4], making them great for energy and libido. 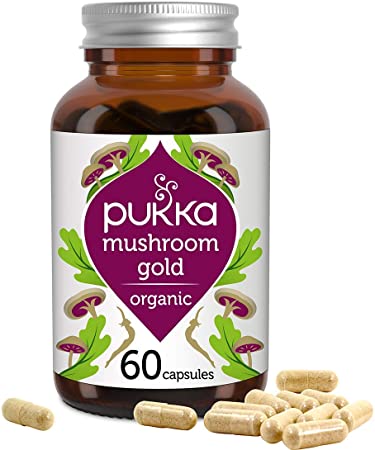 Mushrooms and the immune system

Whilst each functional mushroom has its own alleged health benefits, all medicinal mushrooms would appear to share one thing in common: they all contain powerful polysaccharides called beta-glucans that have been found to help fight inflammation and balance the immune system.

Do we have a favourite? As to which one mushroom works best for immune health, it’s difficult to say – but we do have a few favourite mushroom supplements. Try Pukka’s Mushroom Gold, £21.95 for 60 capsules, or Solgar’s Reishi, Shiitake, Maitake Mushroom Extract , £30.25 for 50 capsules. Both provide a nourishing blend of Maitake, Reishi and Shiitake mushrooms, rich in polysaccharides and beta-glucans, and great for boosting immunity.

[4] Pharmacological and therapeutic potential of Cordyceps with special reference to Cordycepin (nih.gov)